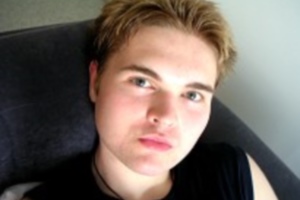 So who are you, and what role do you play in the development of CrimsonLand?

My name is Tero Alatalo and I’m a programmer/artist/designer in Finnish based 10tons Entertainment. I designed, programmed and created a good part of the art for CrimsonLand.

What was the inspiration for making a game like Crimson Land?

could say old classics like Robotron and SmashTV. The whole project actually started out as a simple experiment that played out pretty nicely. The original idea was to just do something extremely playable and relatively simple. The control system (keyboard+mouse) may not be that easy for people not used to multimodal controls, but ‘generation quake’ most likely feels quite natural about it.

Did you always believe it would be this popular?

I still don’t :) Anyway it’s pretty cool to see people actually care and enjoy something you do – it is quite rewarding to say the least.

What is your vision of the final version of Crimson Land? Are you any closer to reaching it with the latest incarnation?

There’s a lot things I’d like to try out with the game, but I think we’re pretty much ‘there’ with this particular game. Something like, say, a sequel would provide a lot better testing ground for new stuff if designed nicely enough.

Do you feel you made the right choice moving from a freeware position to a shareware perspective in terms of development of the game?

In terms of development of the game, absolutely. If we hadn’t gone shareware there wouldn’t actually have been any more new versions. Adding new stuff to the game back then would have required major recoding – a thing I wouldn’t have gone through without the extra motivator. Anyway there really isn’t even a choice to make if you’ve pretty much just offered a chance to possibly earn something with the game, opposed to just dropping the game.

What’s your favourite weapon in the game?

I think my favourites are the shotgun and submachine gun. I know they aren’t probably the most effective ones but I really like how they play out.

Probably Telekinetic, it really helps you get out of tight spots.

Where do you get your ideas for guns from?

To be honest I know they are pretty much clichйs, most of them anyway :). Grand total, there’s over 30 weapons in the current development build of Crimsonland. Some of them are hidden though so you can’t just get them by picking up them on the field. I’ve got to admit that a lot of those guns are variations of the basic types (bullet/plasma/shock rifle/shotgun/minigun) but as a number 30+ is pretty impressive ;)

Will we be seeing multiplayer Crimson Land any time in the future?

I’m afraid that’s quite unlikely with this game. Should there be CL2, it would definitely support proper multiplayer gaming.

Are there plans for an auto-update feature in the game? Many people have talked about the usefulness of this.

Well there’s actually kind of one in the current build available from Crimsonland.com. You can check for new updates and get the link to a newer version (if available) opened in web browser. You’ll still have to install the game yourself but you can easily check if there’s a new version available.

Do you feel there is a lot of things still to implement in Crimson Land, or have you, in essence, hit the nail on the head first time and put in everything you wanted?

As much as I’d like to implement the proper multiplayer game mentioned earlier, I think we’re pretty much already left that one for another game. CrimsonLand is by no means perfect. I’m not sure how many actually notice the stuff I do as the developer but there are definitely a lot small things and balancing issues that could be taken care of. However, the game in whole seems to play out pretty nicely so I don’t think there’s a lot of code I’m going to revise. However, we are going to release one bigger update adding new weapons, perks, and quest levels and stuff though. Also, a simple CrimsonLand mod SDK is actually almost finished for release.

How many people work on Crimson Land?

The game being just a relatively small project, not that many. For the game itself, there have been two guys making the music and sound stuff, Valtteri Pihlajamдki and Ville Eriksson plus we’ve gotten some help with the sound effects stuff from fellows at Reflexive Entertainment. Zach Young from Reflexive also worked as the producer overseeing the development and giving out some great ideas. Few of the in-game characters were modelled by Timo Palonen. The rest of the game you can pretty much blame me. Check the credits section of CrimsonLand to see a list of people contributing to the game. However, although everyone isn’t listed, you shouldn’t forget that we’ve also gotten a huge amount of priceless support from different separate individuals through email and message forums.

Have the fans found all of your Easter Eggs in the game yet, or are there more to see?

Not by a long shot. Actually only a relatively small amount of hidden thingies have been found. You might think it’s pretty pointless to spend time to code stuff perhaps nobody will ever come across but I personally like it when there are things like that in a game. The typing game was actually also meant to be one of the hidden mini-games but we decided to give it out as a reward for completing the game in Quest mode. However I think I may have hidden most of the things even too well or made the hints way too bizarre: as far as I know most of the stuff hasn’t even been found.

Have you thought of developing perhaps a Crimson Land 2 as an FPS or something along those lines?

No, definitely not as a first-person-shooter. Maybe I’m just a sucker for those classic old school shooters but I think making it a FPS would just ruin it; the simplicity and easiness of playing a game that’s – at least logically – two dimensional. The next game is most likely to support 3d graphics, but I’m sure we’re not going for FPS game. Not for the next one anyway.

There are no comments posted here yet